What are the Adrenal Glands and what do they do?

The adrenal glands are small, pyramidal shaped organs which sit on top of the kidneys. They produce hormones that are very important for the healthy function of your body. The adrenal medulla makes adrenaline and other related hormones which you need for the ‘fight or flight’ response. The cortex makes several hormones including aldosterone which is an important hormone for controlling blood pressure and your body’s salt levels. It also makes the hormone cortisol which is an important ‘stress hormone’. Small amounts of sex hormones are also made by the adrenal but these are not usually of any significance in the context of adrenal nodules. 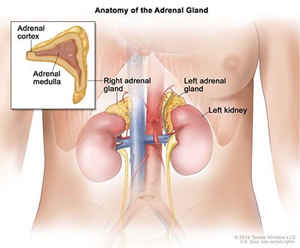 I will fully assess your adrenal nodule to decide if it is functioning or if there is a risk of cancer.

What types of adrenal surgery are there?
To treat an adrenal nodule it is normal to remove the entire adrenal gland. For all types of adrenal surgery you will require a general anaesthetic and will be fully asleep. Most adrenal glands can be removed by a minimally invasive ‘keyhole’ technique. The optimal way of removing benign adrenal problems 4-6cm or less is via an operation called a posterior retroperitoneoscopic adrenalectomy. When the adrenal mass is larger a trans-abdominal lapraroscopic adrenalectomy or an open adrenalectomy is normally required.

What are the risks associated with adrenal surgery?
Although complications after adrenal surgery are rare, as with all operations, these are some risks involved:

What will my recovery be like?
Your recovery will depend upon the type of surgery you have had. You will need some time off from work and I will provide you with a certificate for this. I will also give you a prescription for painkillers.

Please ask me any questions you might have at anytime.